Happy new year, and all the best wildlife adventures for 2014. I'm blogging more frequently now at frantic-naturalist.com/blog, and I'd love it if you subscribe to it.
Posted by Vernon at 6:36 AM 2 comments:

Etosha National Park in northern Namibia is the countries flagship conservation area. It covers some 23000 km2 and is certainly a proper African Game Park, with many high profile game species represented in the park. 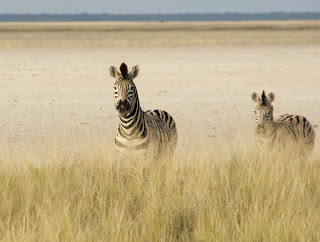 [Image by Vernon | License]
After Christmas, we diceded to take my cousin and her family up to Etosha. They were visiting from Cape Town. Her husband had a double-cab Toyota Hilux with which they had traveled up to Namibia. We bundled her two boys and our two boys in the back, and the eight of us headed up to Etosha for two nights.

Despite being in Etosha while it was raining, we saw a lot. We saw a couple Elephant bulls on the northern side of Fisher's Pan. But we were struggling to find lions. I had almost given up when on our last game drive we got lucky and saw some lions at Klein Namutoni. It was the last waterhole we were going to visit before heading out of the park.

A large male lay about 150 meters away form the waterhole at a clump of bushes. He had a nice full yellow mane, typical of Etosha Lions. Beside him was another female. It could be that these two lions were busy mating, though we didn't see any actually copulation.

At the waterhole itself lay a younger male, without a mane. He was fairly large and we had initially thought it was an adult female. A little further back lay another adult female out in the open.

While we watched a number of herbivores made their way towards the waterhole. As soon as they would see (or smell) the lions, they would stop some distance off.

A few times while we watched, a group of zebras would loose their nerve and bolt off. It appeared that the lions were hungry, and might start hunting in the night. The animals were more weary than usual.

We watched this scene for a while. There were a number of zebra groups now looking on from each of the regular approaches to the waterhole.

To our surprise, instead of backing off like all the other zebra had done, this guy started a prompt walk, going right between the lions!

The lazy lions barely looked up. The zebra stallion walked on until he reached a group of zebras.

As he neared the group of mostly mares they trotted up to him and started rubbing against him.

I've seen similar behavior before. In fact almost any time you find lions near a waterhole in Etosha you'll find one or two zebras or other animals approaching them more than all the others. But this one just seemed to take it a bit far. The lions must have been about 100 meters apart, not far for lions, and this zebra had walked right between them. Also the fact that all the other animals approaching the waterhole held well back made it especially strange.

It was so amazing to watch. They were a bit far off, but I had made sure that my camera was ready, I was thinking 'easy meal' as he walked between them, and we all had a laugh at the reaction of the females. It was a bit too human, to Hollywood, the brave hero has all the chicks hanging from him.
Posted by Vernon at 3:54 AM 1 comment:

My Close Encounter With A Hippo

Jade Scully is a copywriter, blogger and online marketing enthusiast who has published her work on a series of online publications and websites including Leeulekker who provide a range of travel and touring information for southern Africa travelers.

When I was much younger I spent some time in Zimbabwe with my mother and family. We lived in Harare, but would often go on camping trips to Lake Kariba, or stay on a house boat. These were my favorite times as we were pretty much living in the bush, staying in tents, with no city smog and noise to disturb the peace, and my cousins and I could roam free, playing in the grass, swimming in the rivers and lake – it really makes up one of the best memories I’ve got.

It was on one of these summer holiday trips that my mom and I had a close call with a Hippo. 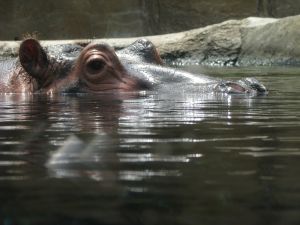 We would swim in the river every day, while someone stood lookout on the high banks, watching for crocodiles. If there ever was a croc-scare we’d all run straight out of the water, squealing with anxious excitement, to the safety of the ground. Fortunately no-one ever came up close and personal with a smiley croc.

One night, it must have been really late or even early morning, I woke my mother up asking her to take me to the toilet. I really couldn’t keep it in so reluctantly my mom clambered out of the tent, with me close behind her, into the dark night.

I immediately sensed a massive being to my left, and turned towards it. My eyes had not adjusted so all I could see was blackness but insistently I whispered to my mom “there’s a hippo right there”. When I mean “right there” I mean “right there”. We had set up our tent close to another couple’s spot, so there wasn’t too much space between us – maybe a couple paces. But my mother, in her exhausted stupor waved away my frantic insistence and we began making our way to the block of loos. All the while we were walking the hairs on the back of my little neck were on end.

I sighed relief as we reached the toilet building and happily did my business before realizing we’d have to go back. Though, as my mother wasn’t too fazed I relaxed a little and we nonchalantly walked back to our tent, unzipped the entrance and climbed back into the warmth without a worry in the world. Perhaps I had been mistaken.

But I wasn’t. The next morning as we approached the breakfast area we saw the couple who were staying in the tent next to ours. They had bags under their eyes and shocked looks on their faces.

“Did you not hear the Hippo last night!?” they asked us.

“Last night, there was a hippo grazing right between out tents for hours. We were petrified.”

My mom looked at me in surprise – I really had been right. 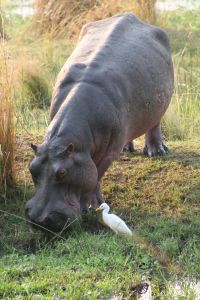 It’s a story we’ve told many times over – without even knowing it my mother and I walked past an adult hippo grazing next to our tent without even batting an eyelid! And considering the bad rap they have with some people, we’re lucky he (or she) was in a good mood that night!
Posted by Vernon at 10:41 PM No comments:


This year the theme is water, which having lived on deserts for so many years is close to my heart.

I'll be blogging over at my personal blog, Sandcurves.com on the topic on Sunday.

Africa is the world's second driest continent, and one of the largest water systems, the Congo drainage, occurs where there are relatively few people. Droughts are as much what one envisages when you think of 'Africa' as Lions and sunset cocktails.

Are you taking part - water is one of the worlds massive problems, but there is so much that can be done, and a lot of it starts with raising an awareness of water - do your bit, register your blog and take part.
Posted by Vernon at 12:00 AM No comments:

Labels: Water
Older Posts Home
Subscribe to: Posts (Atom)
I run my own company in Namibia running nature tours. Check out my website at frantic-naturalist.com

My most popular posts:

From this blog and Frantic Naturalist Blog

A Lion Attack
[A story from my childhood]

Swakop River Flooding in 2009
[The Swakop river is one of Namibia's ephemeral rivers, and rarely flows]

Careful where you pee
[A good story]

Lions and Small Tents
[A good story from Botswana]